People aged 55 and above (older workers) are not too old to work. As their number increases so do the long-term GDP growth prospects related to their employment. Older workers, as they’re called, could generate around EUR 1.8 trillion GDP gains in OECD countries.

Older workers will reach 538 million by 2050. That’s an increase of 50%, which will like put pressure on health, social care and pension systems. Our Golden Age Index shows that encouraging these people to remain in the workforce longer could offset these higher costs. It could also help to improve the health and wellbeing of older people by keeping them mentally and physically active.

What role for older workers in Luxembourg?

In our index, the top four performing countries in terms of harnessing the power of older workers are Iceland, New Zealand, Israel and Sweden. Luxembourg is rather low in the ranking, on the 33rd position out of 34. This means that potential long-term gains from introducing older workers-friendly policies could be significant: 10.6% of GDP growth or EUR 5.3 million. 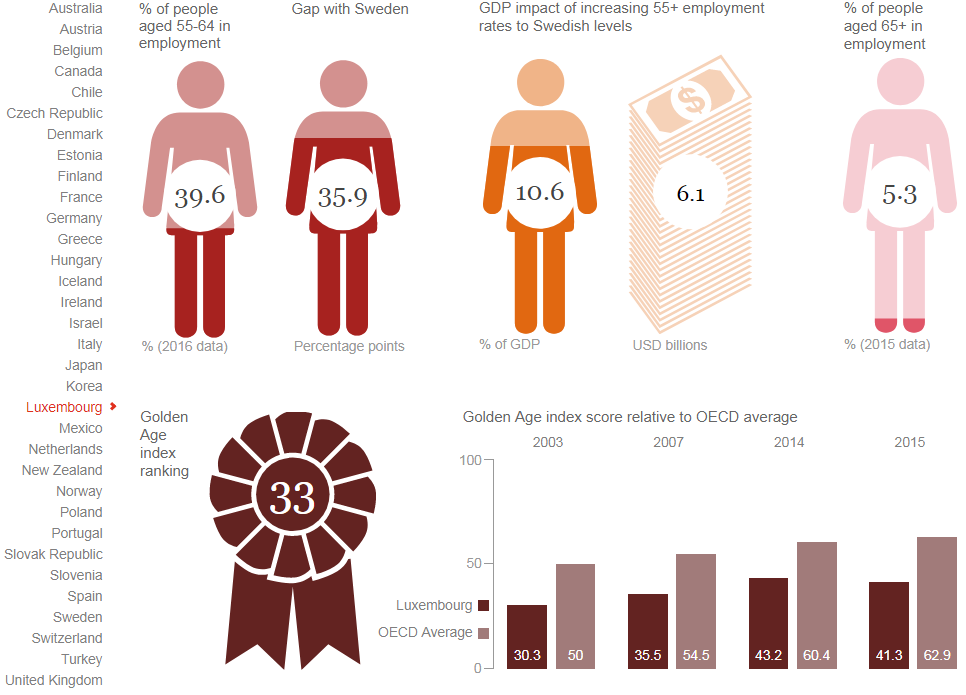 Governments across the OECD focus on reforming pension systems and providing financial incentives to encourage later retirement. Measures to support lifetime learning and training in the face of rapid technological progress are also important.

Our analysis suggests that policies to support these workers should not crowd out younger workers as this will boost demand as well as supply. For employers, flexible working and partial retirement options can pay dividends. So can redesign of factories, offices and roles to meet the changing needs and preferences of older workers. Reverse mentoring schemes on digital skills and extending apprenticeships also feature in the strategies of leading companies we have reviewed.