The global economy is showing positive signs of rebound in 2018. In purchasing power parity terms, it is set to grow by almost 4% in 2018, adding an extra $5 trillion to global output. Find out 5 reasons why 2018 will have the fastest global economic growth since the financial crisis.

We predict growth in the Eurozone to be above 2% in 2018 with the peripheral economies to outpace the core for the fifth consecutive year. Of the larger Eurozone economies, the Netherlands should lead the way with economic growth at around 2.5%. In the same vein, Ireland should be the fastest growing peripheral economy, reaching a 3.5% growth. As for Greece, it is likely to exit its bailout programme in August marking the first year since 2009 where no Eurozone economy is under IMF surveillance. Germany will continue to post the world’s largest current account in absolute terms to the tune of over $300 billion. 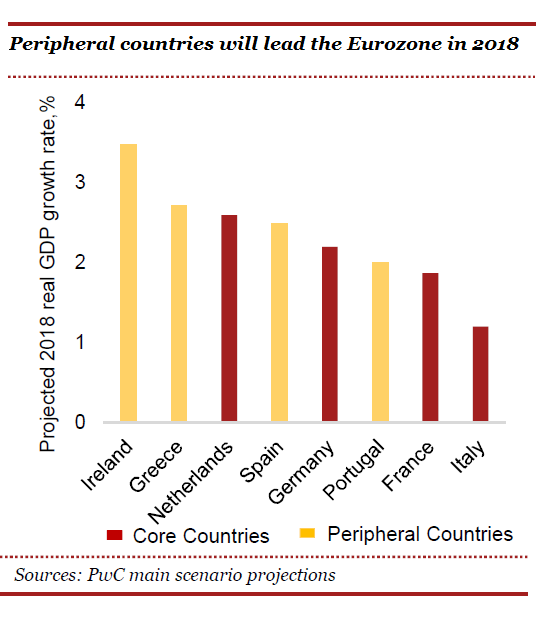 By contrast, uncertainty relating to Brexit is expected to drag on UK growth, which is predicted to be 1.4% in 2018.

Across the G7, the unemployment rate is likely to hit a rate below 5%, equivalent to about 19 million workers thanks to the US.

According to Bloomberg, Germany reached a 5.8% rate, one of the lowest. Additionally, the UK saw a rate as low as 4.6%. The U.S is to be the leader in job improvement with a 4% unemployment rate. Yet these positive predictions are offset by other economies like Italy and France, where unemployment levels remain relatively high. 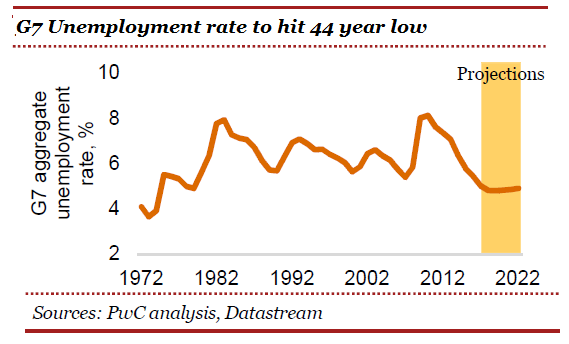 In comparison, employment growth in Luxembourg – not a member of G7 – is set to remain solid, while unemployment is expected to decrease further at 5.9%, according to the European Commission predictions.

3. Population growth – Africa and Asia to be the major contributors

We expect the world will add an extra 80 million people to its population in 2018. The continents of Asia and Africa are projected to be the major contributors, with 40 and 30 million people respectively. This is despite Africa’s current population size being less than a third of that of Asia. Africa’s dynamism will also be reflected in economic output – so it is unsurprising that eight of the ten fastest growing countries in 2018 could be in Africa. 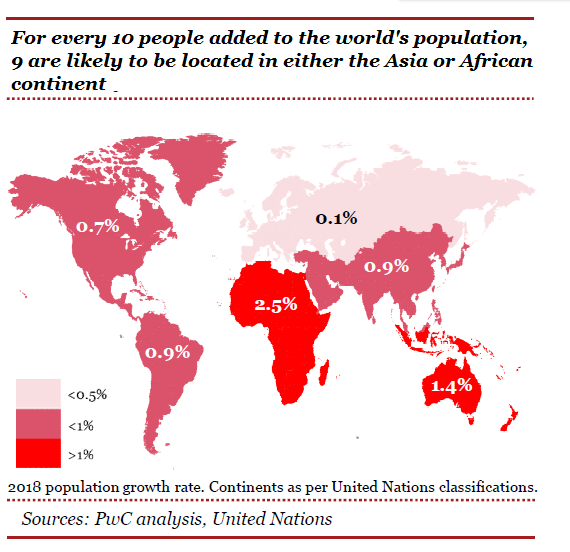 We expect China to grow by around 6-7% in 2018. China recently announced a shift in focus from high speed to high quality growth. This was coupled with supply side reforms addressing structural problems, such as excess factory production and pollution.

Any further, unexpected, reduction in Chinese growth as its financial stability is a downside risk. Looking at the trade linkages alone, Australia and South Korea could feel the side effects to any such slow down as exports to China make up a significant proportion of their trade.

5. India to be the world’s fastest growing emerging economy

We expect India to grow between 7-8% this year. India is at rank 40 in World Economic Forum’s Global Competitiveness Index, the highest in South Asia.

The report is upbeat about India, which is planning massive funding to bankroll its new infrastructure programme. Case in point: the score improves across most pillars of competitiveness, particularly infrastructure, higher education and training, and technological readiness. This is in line with the recent public investments in these areas.

Other countries like Ghana, Ethiopia and the Philippines are also amongst the 17 economies to grow faster than China.