CEOs around the world are surprisingly optimistic about the economic and business environment in the next 12 months, according to our 21st CEO Survey. Where does this positivism, balanced across regions, come from? Despite the geopolitical uncertainty, corporate misbehaviour, and the job-killing potential of artificial intelligence, 2018 may turn out to be the best year the global economy has seen since 2010. The survey reveals, however, faith and cheerfulness don’t necessarily translate into CEOs organisation’s growth prospects. In this article, we discuss this dichotomy and the role CEOs play to help shape the world future, highlighting Europe’s case. 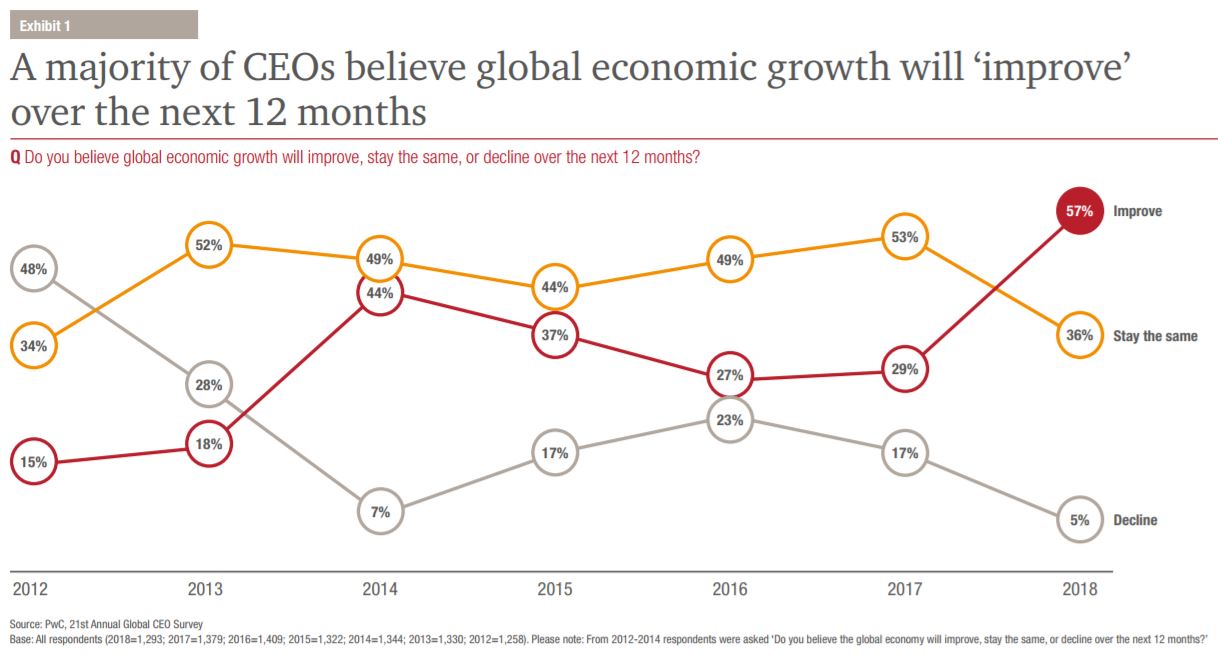 Typically, CEOs report more confidence in the longer term than in the immediate future. Two reasons break the general rule this year:

Scholars have a divergent interpretation of this positivism. Some of them think the world is living a cyclical recovery and people have consequently become more optimistic; others hope leaders believe this recovery is short-term, a sort of little breathing space before difficult times return. For a lasting recovery, says economic historian Carlota Perez “we need a more comprehensive, broader-based, more deliberate change of context.”

While each region reports a mix of threats as the most concerning, there is a common trend: CEOs across the world are increasingly anxious about broader societal threats such as geopolitical uncertainty, terrorism, and climate change, rather than direct business risks such as changing consumer behaviour or new market entrants. 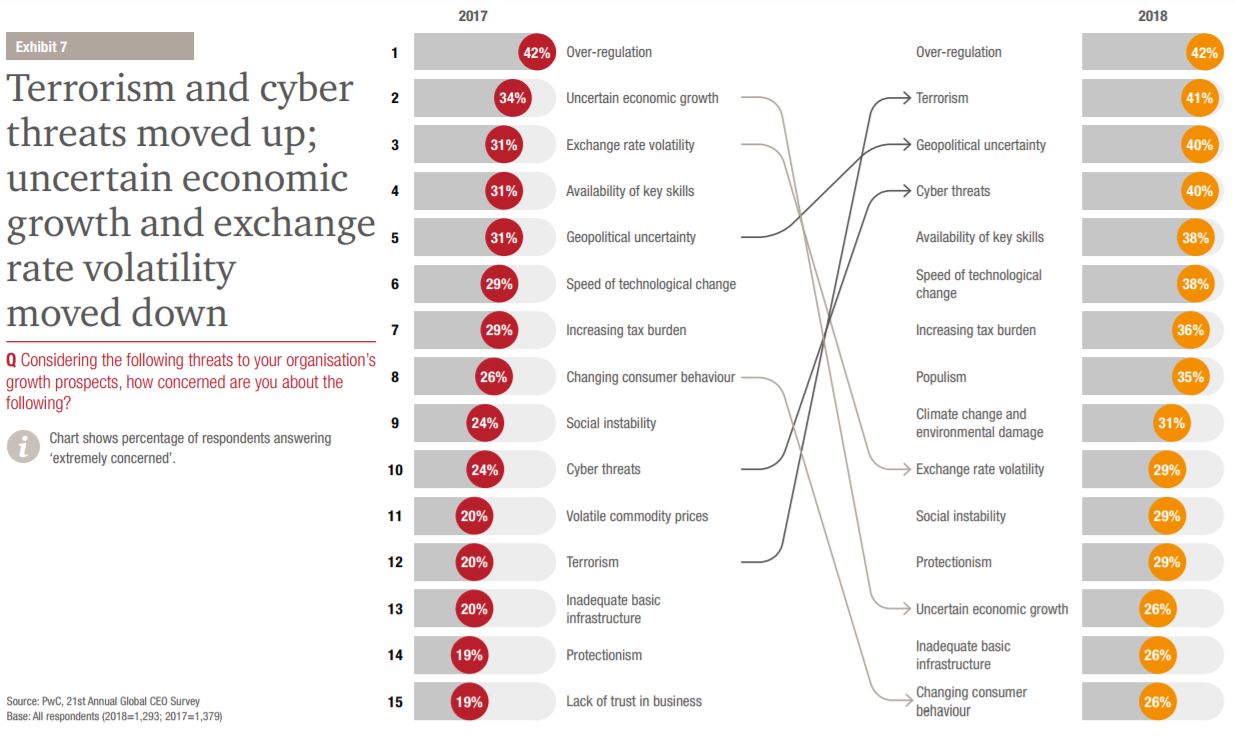 When it comes to Central and Eastern Europe (CEE), availability of key skills tops the list of CEOs’ extreme concerns (51%), followed by over-regulation (48%) and geopolitical uncertainty (42%).

Technology-related developments (e.g., ‘cyber threats,’ ‘speed of technological change’, and ‘availability of key skills’) are the main direct business risks. There is anxiety about the promises and perils of artificial intelligence (AI). We’ve projected that AI will contribute an additional US$15.7 trillion to global GDP by 2030, an increase of 14%. However, those who cannot keep up with AI challenges in time will pay the costs.

Globalisation: the promises yet to come

CEOs continue to recognise the promise of globalisation and feel that promise has been largely realised in certain areas.  Universal connectivity enablement or the easiness of the movement of capital, people, goods, and information are clear examples. However, it hasn’t helped ‘close the gap between the rich and the poor’ according to 40% of Europe’s CEOs. They gave the same assessment of globalisation’s impact on ‘averting climate change and resource scarcity’. Globally, more than one in four CEOs say that globalisation has not helped improve the ‘integrity and effectiveness of global tax systems’…at all. 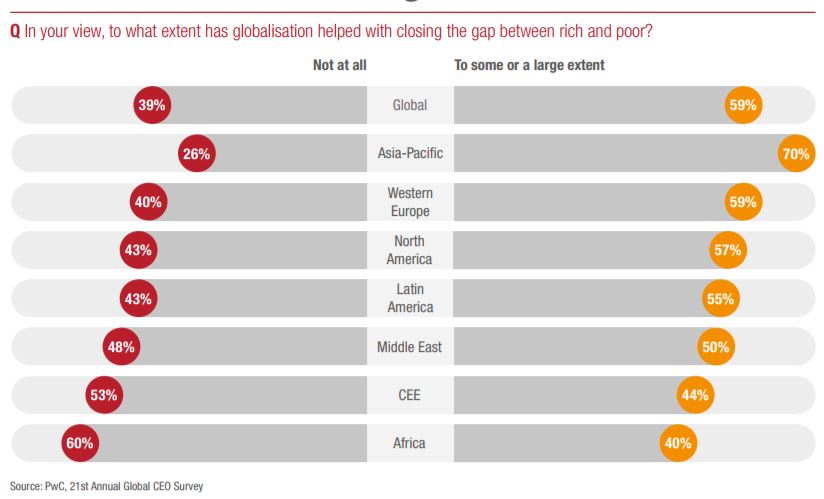 We asked CEOs to consider a number of opposing political, economic, and trade trends and pick a side in terms of which way the world was moving. According to the answers of the CEOs from Western Europe, they consider we’re living in an increasingly fractured world, being the accessibility to the internet and corporate integration the only cases were leaders believe we’re moving toward a unified view. 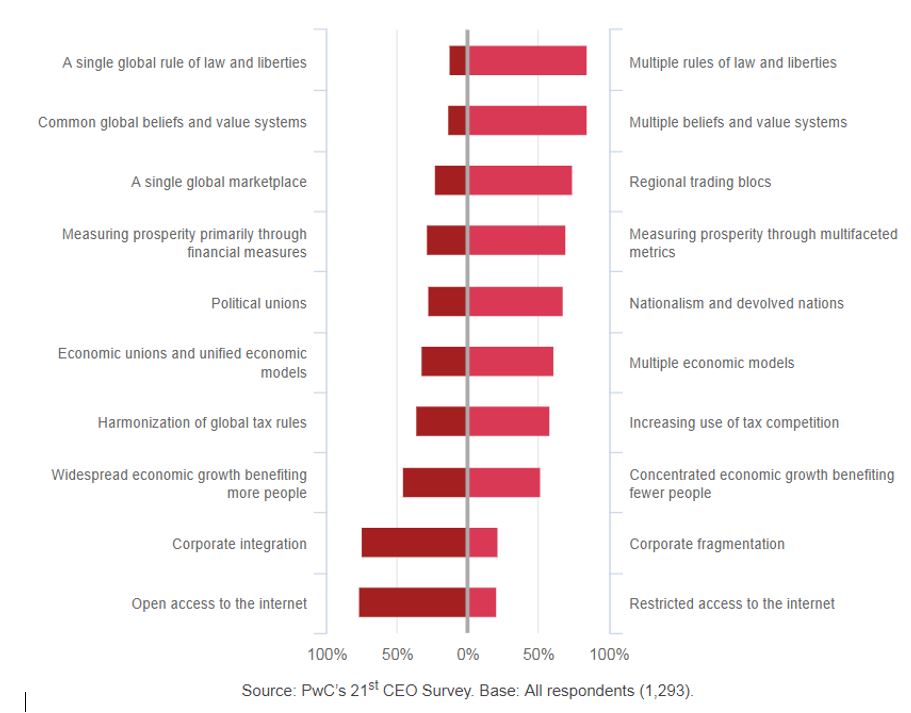 One area in which more fragmentation is a welcome development is in the way we measure prosperity around the world. As such, CEOs across every region and country recognise that the world is moving away from ‘measuring prosperity primarily through financial measures (e.g., GDP)’ and towards ‘measuring prosperity through multifaceted metrics (e.g., including quality-of-life indices)’.

CEOs can play a major role in reshaping the world, even under the increasing uncertainty and disruptive times we live. We have thought of these four approaches:

Purpose defines ‘who’ a business is and why it exists; values and behaviours define a culture. These act as vital guideposts and benchmarks for every important decision. From environmental footprints to social impacts to investor demands, businesses are scrutinised by an ever-wider array of stakeholders. If they fall short in any respect, they erode a vital commodity: trust.

Explore the results of the 21st CEO Survey here.