Rome, 1957: six heads of state signed the treaties to establish what we know today as the European Union (EU). 60 years and 22 member states later, the EU’s achievements stretch far beyond its founders’ ambitions and hopes. It has also survived against more crises than they could fear. We take a look at what the future might reserve for the European project in an uncertain world.

During their meeting in Rome to celebrate the EU’s anniversary on 25 March 2017, the heads of state have reaffirmed their commitment to an “undivided and indivisible European Union”. In their common declaration, EU leaders acknowledged the importance of further integration and admitted it can sometimes happen at different speeds:

We will act together, at different paces and intensity where necessary, while moving in the same direction, as we have done in the past, in line with the Treaties and keeping the door open to those who want to join later.

If the EU summit in Rome didn’t bring anything new to the table, history has shown that crises are needed to make progress. Besides the permanent concern of economic growth and unemployment across member states, European decision-makers have been dealing with three major challenges: security threats and uncertainties, migration flows from conflict zones and the first exit of a member state from the EU.

There’s been an acceleration of geopolitical events, increasing the pressure on EU’s common foreign and security policies in the past couple of years. An increasingly assertive Russia at its Eastern border, fuelling the Ukrainian conflict, and the threatening Islamic State attracting more and more European citizens to its cause are among the main concerns of EU leaders.

Some European officials also question the future of global trade relationship, especially in the context of an American administration prone to protectionism. During his visit in Europe, Vice-President Mike Pence tried to address these concerns and reaffirmed his country’s commitment to further deepen US-EU ties in the coming years.

Since 2015, the migration influx has been one of the greatest challenges faced by European leaders and policymakers. In addition to the many questions raised around security, border control mechanisms and sovereignty, this issue has called into question the idea of a borderless Europe. In addition, it has put a great strain on the asylum system. The efforts to tackle the crisis while balancing the need for stronger border security with the obligations to rescue migrants under international law have revealed divisions between member states.

In June 2016, UK citizens voted for the exit of their country from the EU. After several months of political negotiations and formalities, Prime Minister Theresa May has triggered the Article 50 of the Treaty of Lisbon last week. This is an unprecedented event, especially as the Article 50, allowing for the exit of a member state, has been a controversial topic since its introduction in 2004. Businesses, governments and EU institutions are dealing with a lot of uncertainty for the two coming years. In addition, populism is on the rise in several member states, questioning not only the establishment but also the relevance of the single market and its four freedoms.

The EU will lose an influential member, which will shift the balance of power in the European Council and change relationships between other large states. The spotlight will fall on France and Germany. Brexit could either bind them together or push them apart. It all depends on their future elections’ results. Brexit is also a warning of the consequences of the disconnection between the EU and its citizens. It’s now up to national decision-makers to make sure that this wake-up call doesn’t fall upon deaf ears.

The future is work in progress

“Europe will not be made all at once, or according to a single plan. It will be built through concrete achievements which first create a de facto solidarity.” (Robert Schuman, French Minister of Foreign Affairs, 9 May 1950)

This is how the European Steel and Coal Community (ESCS) has evolved into the European Union as we know it today, a symbol of unity, peace and flourishing democracy. The EU features a single market (where people, goods, services and capital move freely), a border-free area (Schengen space), and a single-currency zone (Euro area). In addition, it has harmonised rules in all member states across numerous areas of policy: trade, agriculture, competition, transportation, environment, energy, industries, humanitarian aid, justice, education, public health, research and much more. 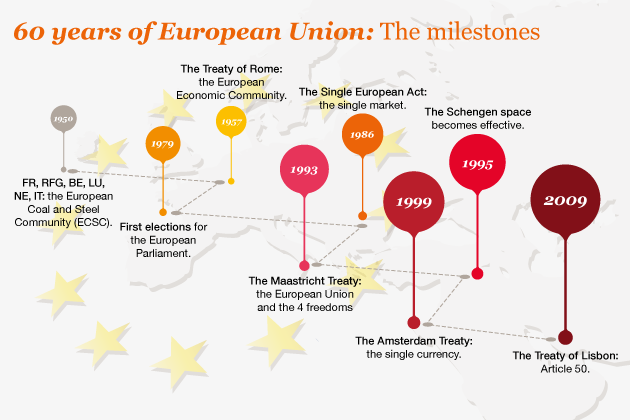 Today, EU economies are slowly improving after the global financial crisis. National and EU-driven economic strategies may progressively start to bear fruit even though further consolidation and a reduction in the debt burden is urgently needed in many member states. The EU is actively implementing initiatives and investing in programmes to support economic growth and job creation in European countries.

The EU2020 Strategy launched in 2010 (EU’s growth strategy for the current decade), aims to foster a smart, sustainable and inclusive economy, through very specific targets:

Employment: 75% of people aged 20–64 to be in work
Research and development (R&D): 3% of the EU’s GDP to be invested in R&D
Climate change and energy: greenhouse gas emissions 20% lower than 1990 levels; 20% of energy coming from renewables; 20% increase in energy efficiency
Education: rates of early school leavers below 10%; at least 40% of people aged 30–34 having completed higher education.
Poverty and social exclusion: at least 20 million fewer people in – or at risk of – poverty/social exclusion

Member states’ progress in the EU-wide effort to reach these targets is monitored throughout the European Semester. This strategy translated into a multitude of initiatives to promote innovation, entrepreneurship and digital transformation.

In 2007-2013, EU’s Cohesion Policy (often referred to as the Regional Policy of the European Union) has helped create one million jobs, which is one-third of overall net job creation across the EU during this period. It also generated EUR 2.74 of additional GDP for every euro of Cohesion Policy money invested, meaning an estimated return of EUR 1 trillion of additional GDP by 2023. Almost 400,000 SMEs have already benefitted from the policy.

In 2015, the European Commission launched a multi-billion euros plan to stimulate investment – the so-called Juncker Investment Plan. The Commission expects the European Fund for Strategic Investments (EFSI), co-sponsored by the European Investment Bank (EIB), to mobilise EUR 315 billion in additional investments in the real economy and help thousands of smart businesses and start-ups to access finance. Last year, the member states agreed to reinforce and expand it.

The European Union is still work in progress. Since its creation, the European project has been in a permanent state of mutation to adapt to new challenges and seize opportunities. The current crises will further shape it and there’s nothing wrong with that. There’s room for more integration at all levels and it’s up to member states to decide which way to go for more prosperity and security.

More articles will follow to focus on European strategies for digital transformation, innovation and growth, so stay tuned!