Our Golden Age Index 2018 shows that the OECD (Organisation for Economic Co-operation and Development) is gradually improving towards a greater engagement of older individuals in the workforce. Weighing an average of seven indicators that reflect the labour market for workers over 55 years, the Index shows that countries like Iceland, New Zealand, Israel, Estonia and Sweden have successfully closed the age-gap in the work population and benefit from a positive, long-term impact in their economies. As they raise the bar in employing an older workforce, other members of the OECD work to catch up to these countries, including Luxembourg, which occupies the 34th place. What drives the employment of an older workforce across the OECD? What main challenges does an older workforce face? What is the situation of older workers in Luxembourg? We answer these questions in this article.

The economic potential of retaining an older workforce

Our Golden Age Index takes a holistic view of the labour market for older workers across the OECD. By considering a broad range of indicators (employment rate, gender gap in employment, full time earnings, among others), we explored in detail the economic prospects of older workers over 35 OECD countries over time. 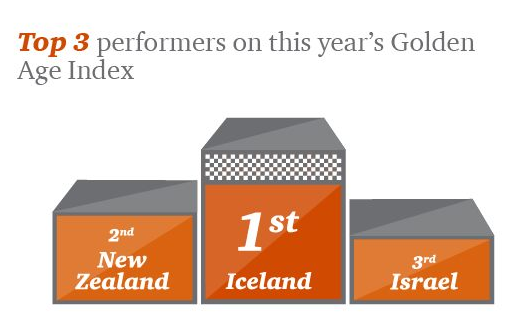 According to our study, Iceland, New Zealand and Israel continue to occupy the top places, followed closely by Israel and Estonia. On the other side of the coin in Southern Europe, Turkey, Greece and Italy had the lowest performance on the Index.

In the long-term, increasing the employment of an older workforce may boost the OECD’s GDP by $3.5 trillion. If countries raise their employment rates and facilitate access of 55+ year old workers to the labour market, the OECD would match current New Zealand employment levels.  Even though countries like Italy and France have the potential for long-run increases of GDP, countries that scored lower in the Golden Age Index have the most to gain in the long-run from increasing their employment rates. In this case, Greece could take the lead but experiencing the largest GDP increase of around 23%. 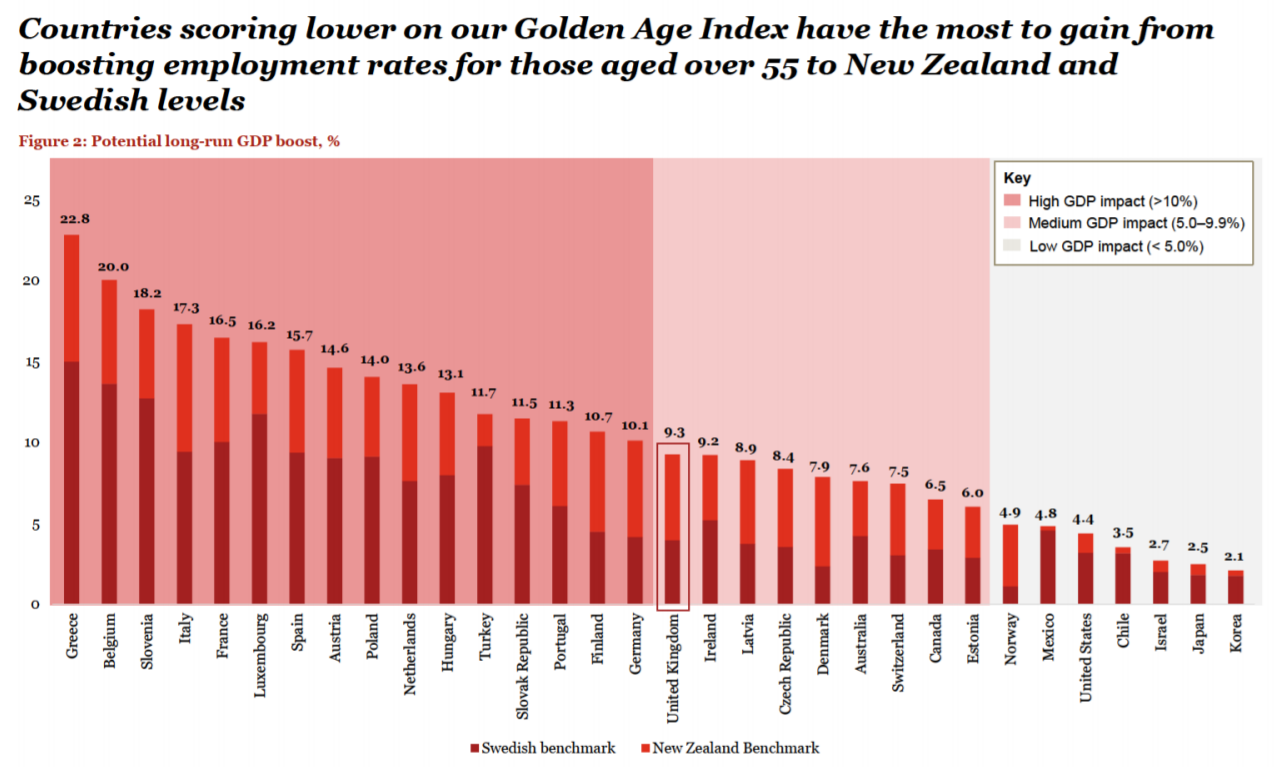 Automation poses both potential opportunities and challenges for older workers. AI technology can boost economic growth, generate more labour demand and support longer working lives (e.g. through use of digital platforms that allow older workers to market their skills more widely). However, it could also require some older workers to retrain for adapting to new careers later in life, as well as to acquire additional digital skills when performing the current ones. 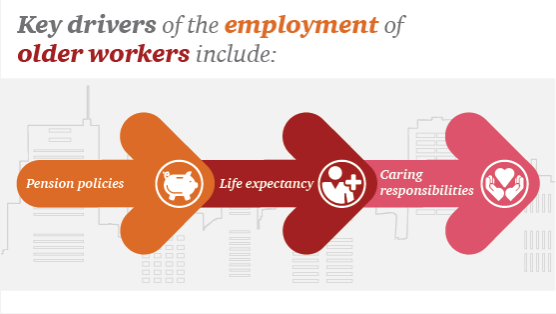 Financial incentives and caring responsibilities are the key drivers in the decision for older workers to continue working. Implemented policy measures that include greater support for health, wellbeing, and flexible working, the flexibility of pensions and further training and support for older workers to become ‘digital’ are conditions that employers should consider to motivate a longer professional career.

Taking New Zealand as an example, the country developed several policies and a work culture that encourages a longer work engagement. Here is how they ranked second on the Index:

What is the main challenge the older workforce faces?

The main challenge comes in the form of technological innovation. Automation is changing the way we work by erasing some jobs but creating new career opportunities and business models. According to our Golden Age index, automation could impact up an average of 20% of jobs on average performed by older workers over the next decade, especially in financial services and insurance sectors. Clerical roles, a big portion of jobs in the financial services sector, are occupied by older workers. It’s estimated that 50% of these jobs are at risk of automation within the next ten years. In addition, roles in a managing level are likely to demand a deeper digital knowledge and literacy skills.

The challenge might also be the solution to employ older workers though. Automation has the potential to boost economic growth and create new jobs. According to the Golden Age Index, the global GDP will go up to 14% in 2030 because of the accelerated development of AI and its implementation in businesses.

Some of the potential opportunities for older workers are:

How can Luxembourg benefit from the older workforce?

As we previously mentioned, Luxembourg occupies a rather low place in the ranking. This means that, in the long-term, the country could benefit from a 16.2% GDP boost if it manages to engage older workers to stay active longer. 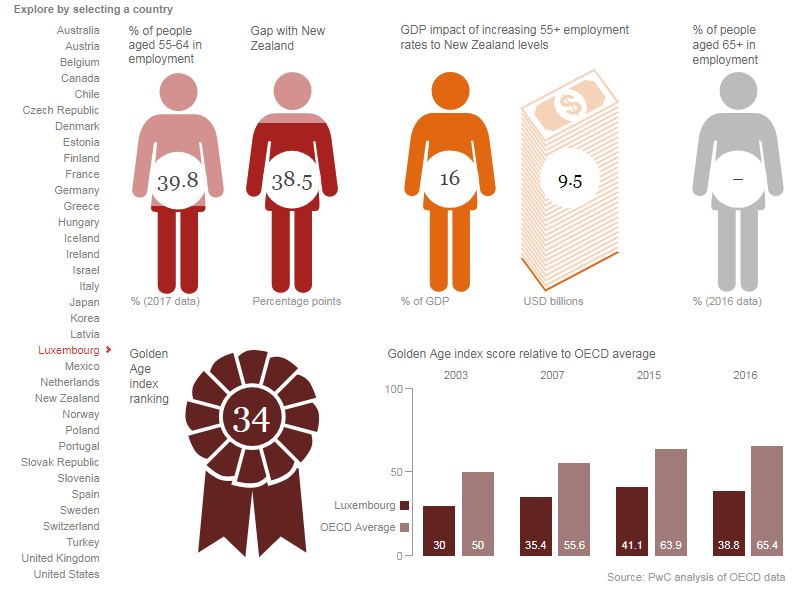 In Luxembourg, the quality of work may be one of the key factors encouraging older workers to extend their career life.

The European Union and the Luxembourgish government have already put in place a number of labour market and social policy reforms. Among them, we can mention the importance of quality in work and employment, career and employment security, health and well-being, skills development, work life balance. Even though these measures aren’t specifically designed for an older workforce they offer a high level of protection to employees and ensures their development both while being employed and unemployed.

When it comes to older workers, in 2013 the Ministry of Labour Employment and the Social and Solidarity Economy reformed the Fit4Job – Restart my career project to help an older work force fit better with companies’ requirements. To achieve this, lifelong learning plays a key role in maintaining jobs and in the quick reinsertion of older workers in the local labour market. For this the public co-financing system of lifelong learning (LLL) was modified in 2012 to include professionals over 45 years with limited academic and work qualifications.