Confident in their growth prospects, Luxembourg CEOs are not complacent. They understand the need to transform their business to accommodate technology advances and the shift in global economic power. They also worry about getting the right skills and people profiles. Some of them have mixed feelings about Brexit. We’ve taken their pulse in a recent survey and here’s what they think.

Technology is giving people access to more information about what companies offer and so, it’s raising the bar for the minimum standards. In other words, technology empowers clients, regulators, suppliers, employees and capital providers. Mobile connectivity and social media have become fundamental ways of getting information and buying goods and services. The “Uberisation” of a growing number of sectors is also becoming an important trend in changing customer perceptions of value. Together, these factors are helping reshape how people interact with brands and what they expect of them.

In Luxembourg, financial-sector companies are actively looking at the latest advances in the field of FinTech. They’re preparing to embrace the digitalisation of their business models. Non-financial-sector companies are also on the lookout for developments in Artificial Intelligence, Big Data, Robotisation and Automatisation, stirring the third industrial revolution.

To enhance relationships with their customers, Luxembourg CEOs bet on customer-relationship management systems and web-enabled collaboration tools. They’re however less keen on using social media tools than their global peers. They’re also less likely to believe in R&D investment. This is actually a reflection of the fact that the R&D expenditure in Luxembourg is smaller than in other developed economies. R&D intensity – i.e. R&D expenditure as a percentage of GDP – stood at 1.3% in Luxembourg in 2015, while other developed economies have figures above 3% (Austria, Denmark, Japan, South Korea, Sweden) or 2% (China, Germany, France, United States, etc.).

Gear up for the shift in global  power

The shift in global economic power will likely have the second-biggest impact on wider stakeholder expectations. This shift in power may be seen as either a threat or an opportunity for advanced economies.

Luxembourg is staying a step ahead to maintain sustainable growth by connecting with emerging economic powers, in particular, China. One example in the financial sector is that Chinese banks are being encouraged to set up operations in Luxembourg. As of February 2017, the five largest Chinese banks have settled (or are considering settling) their European headquarters in Luxembourg. Furthermore, Luxembourg is the most important cross-border renminbi (RMB) hub for business in the eurozone. Another example, in the logistics industry, is the Memorandum of Understanding (MoU) set up to evaluate the possibility of a railway connecting China to Luxembourg.

The Holy Grail for Luxembourg CEOs is… talent

There are many worries that globalisation and technology will eliminate jobs. However, technology also creates new jobs and it’s people’s ability to acquire new skills what kept them employed through past disruptions, like the industrial revolution. 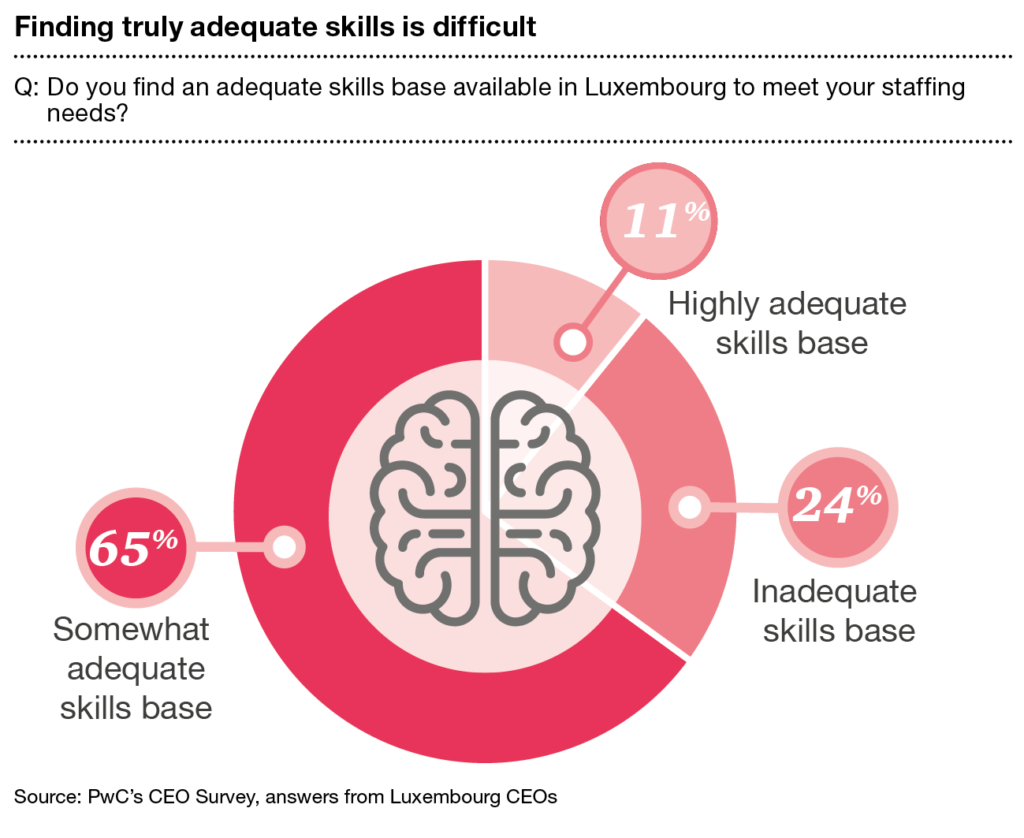 Over half of CEOs in Luxembourg expect their headcount to increase over the next 12 months. However, 27% of them expect a decrease in headcount – perhaps as a consequence of their investment in technology.

An overwhelming majority of CEO’s active in the non-financial sector believe Brexit will have no impact at all in the near future. In the long term, however, their opinions split, with a third of them worrying about “unfair” competition from UK players due to deregulation in the UK, as well as a decrease in business from UK clients. On the brighter side of Brexit, CEOs anticipate positive spillovers from financial activities being relocated to Luxembourg, thus increasing demand for their products or services. 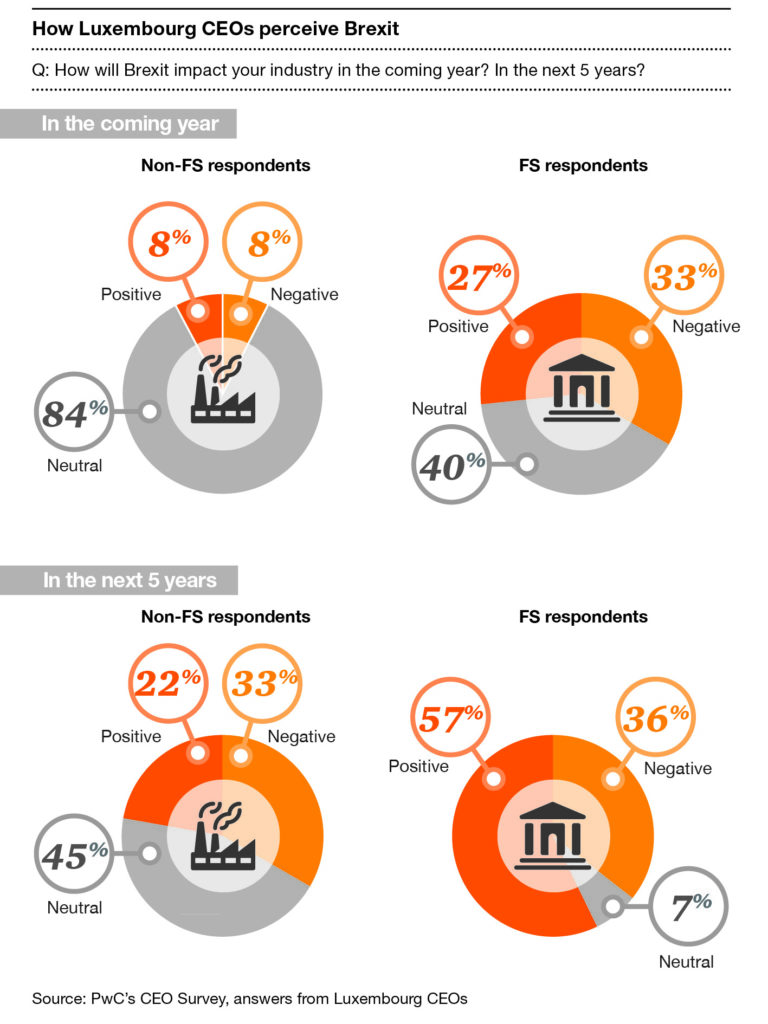 Clearly, Brexit’s impact on the Luxembourg economy will initially spread through the financial centre. CEOs from the financial industry don’t agree on the short-term outcome of Brexit, with many dwelling on uncertainties. On the longer term, the majority of CEOs manage to the silver linings: they anticipate that financial-sector activities will be transferred to Luxembourg (e.g. outsourcing, delegation, domiciliation of management companies/headquarters) and an increased use of Luxembourg fund structures (such as the RAIF).