Digital technology is changing how we interact with each other or with society and how we trust one another. A new economic model is emerging: the sharing economy. We’ve gathered insights from world-renowned experts and in-house research to give you an overview of:

What are the dynamics of the sharing economy?

Airbnb is reshaping the provision of short term accommodation. The principle is simple: repurposing spare space in units of one, aggregated through a platform. In the same way, BlaBlaCar allows people to sell spare space in their cars when driving from one city to another. This is the shift from centrally produced, centrally-distributed services to demand aggregation by a platform and production by a crowd of people. We’re witnessing the birth of a new economic model: the crowd-based capitalism or the sharing economy.

Arun Sundararajan, Professor and the Robert L. and Dale Atkins Rosen Faculty Fellow, New York University’s Leonard N. Stern School of Business, has spent many years researching the dynamics behind platform-enabled businesses and how they shape society. He explains his findings in the video below:

YouTube vs. traditional television is the simplest example of how the crowd-based content compares to the institution-based one. Television broadcast involves companies that own infrastructure, companies that develop content, large studios and then a large entity transmitting everything into airwaves. On YouTube, we work with channels.  The delivery is still managed by a large platform, but the content is produced by a wide range of producers – several million amateur providers.

We’ve got used to the idea of transacting through a digital interface. What makes the crowd-based capitalism a viable theory is the creation of an infrastructure of digital trust. Research has shown that the level of trust in a stranger who has a full BlaBlaCar profile is higher than the level of trust in colleagues and neighbours, approaching the levels of trust in friends. The technology enabling users to hold their driving licence to a webcam and have it checked, together with peer feedback, extends the kind of trust that used to exist in a small community, like villages, to anyone who has a similar software profile.

This explains how financing moves from institution-based to crowd-based. Energy production is also shifting from a centralised model to a multitude of individuals with solar panels who distribute energy to people in their proximity.

European countries must seize the moment

In the next few years, sharing economy revenues in Europe will grow at roughly 35% per year, around ten times faster than the wider economy as a whole over the same period. Its growth will be broadly spread: by 2025, four out of the five sharing economy sectors listed below could facilitate over EUR 100bn of transactions on an annual basis. 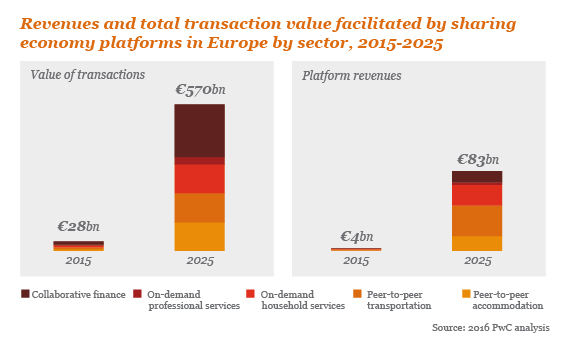 Luxembourg is the first EU country to develop a cross-sector national strategy to move towards a green, smart and digital society. In 2015-2016 an expert team led by economist Jeremy Rifkin has put together a collection of policy recommendations. The Third Industrial Revolution report has served as a basis for a series of concrete measures already announced by the Government, in the following areas: 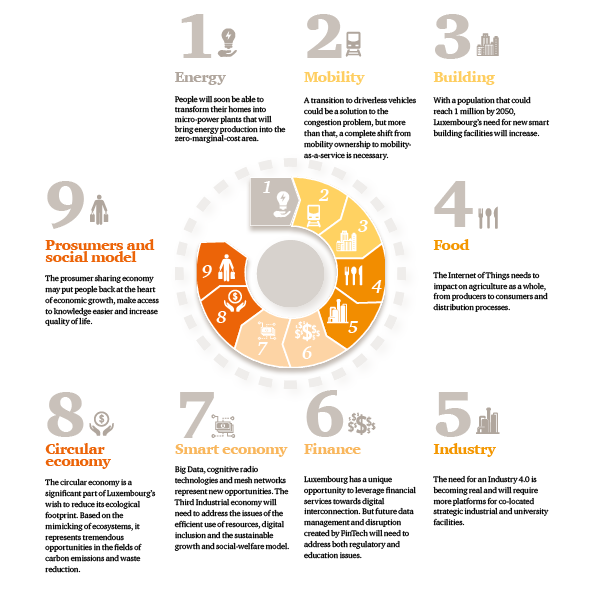 We’re moving from smart homes to smart offices to smart cities and megacities. Since 2006, more than half of the population lives in cities and, by the end of the century, over 70% and even 90% in some OECD countries will do so. We’ll have to deal with the organisation of life in the cities not only in terms of managing high densities but also of keeping pollution at bay.

Successful cities will facilitate the largest, most diverse number of people to collaborate effectively and share resources, whether that is infrastructure, technology, cultural facilities or ideas. In short, the most successful, growing cities embody the sharing economy. These cities also have the best public transport networks, with advanced features, such as bike-share schemes, multi-modal transport options, advanced ticketing systems, taxi sharing, Uber and Lyft.

People are reassessing their career and lifestyle choices

This is a circular process in which technological or demographic changes and the sharing economy enhance each other. And it’s not just about millennials or Gen Z. We’re living longer and working longer. The traditional, three-stage life (study, work, retire) has evolved into a multi-phased, less structured life. As a result, across all demographic groups, people are reassessing their career and lifestyle choices. They’re becoming more demanding as they strive harder to ensure that their working lives are better integrated with their broader lifestyles. More people work from home. Companies will need less space and it will change the nature of offices fundamentally. It will make a lot of the current office stock obsolete.

Offices will be ruthlessly judged on their technological capabilities and how they boost collaboration and human interaction. The quality of the workplace and how it aligns with all the other places we spend our increasingly integrated lifestyles will become a key tool in the war for talent. We’re talking about health and well-being, about air quality, filtration systems, particularly in cities like London and Paris. There are concerns about nitrogen dioxide and it may not be long before people have wearable pollution monitors and choose their working space.

The future of work and the social contract

The US elections’ result highlighted that we’ve been through a wave of automation and a change in business models that have displaced many workers and hollowed out the middle class. People who used to see opportunities, don’t see them anymore.

In a future shaped by crowd-based capitalism and automation, we’ll see the fraction of independent workforce growing very fast. The greatest public policy challenge is to make sure that for those people who have a good social contract today, there will be one tomorrow as well, even if instead of working for a company, they’ll work for a platform. As platforms take over the role of companies, we have a new relationship between the individual and the company.

Before, the individual was providing talent and the company paid a salary in exchange. We’ve managed to create a particular social contract meant to build expectations and then fulfil them. Simply put, if people go through studies and then get a job with a good company, they will benefit from stability, health insurance, paid overtime etc. This relationship is changing and we have to think about what this new social contract will be about.

People who work through platforms don’t have a clear career path, nor health insurance or unemployment benefits. The long run impact of crowd-based capitalism is changing the meaning of having a job.

Who will set the rules?

We’re at an experimenting stage and, in the next years, some new organisational models will emerge. Organisations will have a very small footprint, but the number of people running their own business via platforms will expand greatly. The rules of the game are changing, but who’s designing them and, most importantly, who will enforce them?

When calling for an Uber, the platform is sitting between the provider and the client. The government could, therefore, delegate some of its previous responsibilities to the platform. The emergence of the sharing economy will increase the regulation environment. In the next 20 years, however, regulations will be completely different from what they are today, with more reliance on self-regulatory organisations (SRO).

The SROs can take many forms, and particularly of a data-driven delegation. The government sets the rules, but the enforcing responsibility belongs to the party that holds the data.

What does the sharing economy mean to you? What platforms do you use and how have they changed your life? Leave a comment.

PwC, Future of the sharing economy