Could Bitcoin be to Cryptocurrencies what Napster was to Peer-to-Peer file sharing? Napster helped shape the web 2.0, intentionally or not. Bitcoin might be the precursor of a world where crypto-assets-based transactions are as common as relying on your smartphone for, well, almost everything.

If you were a child when Napster went under scrutiny back in the late 90s because of legal matters and finally shut down, the infamous Google Glass may be more familiar to you. Born in 2012, it was supposed to become the next big technology but it died three years later. Indeed, Google announced the end of the project somewhere in 2015.

The story of Napster and Google Glass have three things in common: they were ahead of their time, there was no regulation to frame their usage and a large majority of people didn’t fully understand them. It resembles, somehow, the bittersweet story of Bitcoin. At least until now.

Blockchain, tokens, cryptocurrencies, crypto-assets, etc.. Can you define them and say what the difference between each other is without getting agitated? And Bitcoin is what…exactly? Answering these questions is anything but easy, we know.

Despite the ups and downs and obscurantism of the world where Bitcoin is certainly the most ubiquitous name, blockchain and crypto-assets are steadily becoming mainstream, and with the increasing involvement of institutional players, they are set to play a greater role in transforming various businesses and aspects of the economy. While Bitcoin may be lost in the memories of the history of finance, crypto-assets are meant to stay for a long time.

Earlier this month, we organised the event, “Crypto-assets, nothing but opportunities” to raise awareness on the largest crypto-asset dimensions and, ultimately to stimulate growth. In this article, we summarise the main ideas of the event and the knowledge that Henri Arslanian, PwC FinTech & Crypto Leader in Asia, shared with the audience. The paragraphs to come are spiced up with bits of clarifying definitions and peppered with the history around crypto-assets. So let’s get cooking!

Give unto Caesar that which is Caesar’s

Cryptography isn’t a XXI century invention. On the contrary, it’s believed to be as old as the Roman Empire. Before telling a short story, let’s agree on a simple idea: cryptography consists in abandoning physical locks and using ciphers instead. Think of ciphers as virtual locks.

In 58 BC, likely in a warm summer day, Julius Caesar, seated in his war room with his advisors, made a decisive yet bold military decision that he wanted to send to his faithful General Cornelius. That’s the moment when he, for the first time, used a method to transfer information secretly that resembled what we know as cryptography. Caesar used “the shift of three” code (where “A”, for example, became “D”), shifting letters of the message so it became meaningless in case the enemy intercepted it. General Cornelius, located a few miles east of the Roman Empire, had no problems to decipher the message because he had previously agreed with Julius Caesar, the rules to decipher it. 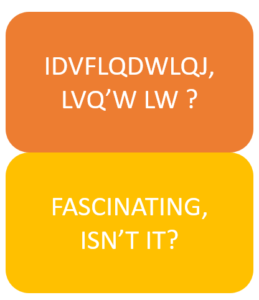 An example of the “shift of three” code

If a blockchain is a set of intersected pipes (a distributed ledger), crypto-assets would be the matter that goes through them.

As the suffix of the term suggests, crypto-assets use encryption techniques (cryptography) to secure and verify that the matter reaches its destination securely (a transaction).

The matter that goes through the pipes isn’t the same all the time. In some cases it is  cryptocurrencies (for example altcoins or alternatives to Bitcoin), in other cases it is tokens.

Following our pipes analogy, while cryptocurrencies can travel alone through the pipes because of their intrinsic characteristics, tokens need to be attached to any cryptocurrency or coin to do so. They aren’t a currency, but they represent assets that are fungible and tradeable.

The following sentence about the difference between cryptocurrencies and tokens is clarifying: “You can buy a token with a coin, but not vice versa. A coin operates independently, while a token has a specific use in […] a project’s ecosystem”.

To make this crypto-assets story a bit more complex, there are also ethereum-based cryptocurrencies and tokens. Ethereum, an open software platform based on blockchain technology, is used to develop decentralised applications. Smart contracts, a piece of code stored on a blockchain, are the most well-known Ethereum application.

In simple words, a token is the representation, physical or digital, of a fact. Bank notes, for instance, are considered “token money” because their value goes beyond the material they are made of.

We bet most of us (including you) have used, at least once, a digital token that allows us to access a digital platform and make a transaction, let’s say, on a bank website.

There are other digital tokens that business offer as investments so their value fluctuates depending on the success of the business. They are the famous – or sometimes infamous – ICOs (Initial Coin Offerings).

Digital tokens have limited use, on a specific platform, for example, and for specific products or services.

Tokens are still considered risky, though, because of cybersecurity issues, a (still) weak support of the banking industry, etc. For instance, an attacker who gains access to a private key could transfer associated funds of significant value in seconds while the transaction would remain irreversible as well as the identity of the attacker unknown.

Despite today’s obstacles, the tokenisation market is growing and investor interest has witnessed several innovations with respect to the rights that tokens represent, the token sales process as well as their governance, reach and purpose in the blockchain ecosystem. For instance, while tokens traditionally represented utility rights, today they are often valued based on real-world assets and fiat currencies (a government-issued currency). The industry is paying greater attention to Security Token Offering in addition to ICOs. More than $20 billion are estimated to have been raised via token sales in 2018 alone.

Why we need crypto, after all?

Blockchain-based crypto-assets, then, inherit all the benefits that blockchain technology brings.

Although the use of paper currency entirely changed the way we perform financial transactions, it needs a central authority – the government, the bank and commonly both – to issue it. With cryptocurrencies, the reliance on trust to a third party, also called “the middleman” reduces and eventually disappears.

Store of value, unit of account and medium of exchange, crypto-assets such as Bitcoin or the evolution of it have the potential to strongly influence our financial system should the current drawbacks, fears and lack of support from the traditional banking system be solved.

The types of crypto-assets

During the crypto-assets event, Henri Arslanian, took the participants on a trip where the different types of crypto-assets were the main attraction. And he did this in a very digestible way. This is our take.

There are two types of crypto-assets: cryptocurrencies and tokens.

Cryptocurrencies are designed as mediums of exchange. There are several types of them. Bitcoin is surely the most well known cryptocurrency, but there are other altcoins – alternatives to Bitcoin too (litecoin, dogecoin, monero, etc). Bitcoin has the potential to facilitate global transactions and, as many people expect, boost financial inclusion. On the other hand, there are Ethereum-based cryptocurrencies like Ether, Tron or EOS.

There are four types of tokens:

Crypto-assets: becoming famous by being infamous

Although there were attempts to bring money into the digital arena before Bitcoin, the world considers it as the first cryptocurrency. When Satoshi Nakamoto created Bitcoin somewhere between late 2008 and 2009, his intention was to develop a peer-to-peer electronic cash system using a distributed ledger – the blockchain – on not precisely a currency.

Several Bitcoin derivatives appeared after 2009, and the world of cryptocurrencies has grown since then. 2017 represented, however, an inflexion point in the crypto history. On 17 December, the value of Bitcoin reached the astonishing value of US$19,783.06.

To worsen the situation, when Bitcoin and other cryptocurrencies’ prices started to plummet in 2018, an unknown number of ordinary people who invested in them lost money and are likely to associate cryptocurrencies with financial ruin for a very long time.

Despite certain resistance that has affected wider adoption, crypto-assets are here to stay. The market has already grown exponentially since its inception, with the current market capitalisation exceeding US $140 billion, including more than 2000 crypto-assets and 16,000 trading markets. In fact, we’re seeing  different approaches to policy-making across jurisdictions to create a competitive and favourable crypto-assets ecosystem.

However, while numerous security tokens will appear, the quality of some of them will resemble the bad coins of the great cryptocurrencies’ hype. The challenges to tokenisation currently include regulatory uncertainty (although significant progress has been made of late), need for greater support from the traditional banking ecosystem, cybersecurity as well as safekeeping of crypto-assets. In the months and years to come, more advanced security token protocols will emerge, boosting the creation of liquidity in the security token market.

Overall, the domain of blockchain and crypto-assets is on the road to broad acceptance. It deviates significantly from other new technologies, and users will likely face several challenges when adopting it. While it’s important to raise awareness on the advantages of crypto-assets and how they will influence the financial services realm, it’s crucial that we start addressing challenges such as the lack of regulation, approaches to crypto-assets safekeeping and market solutions for broader adoption. This will motivate users and clients to tap into the real potential of the crypto-assets and profit from them now and in the future.