Smart watches, smartphones, smart-clothes. All of them bring the promise of assisting us intelligently, making our lives easier. That’s what the voice-based assistants currently do. The need for validation, if any, comes from us. There are smart contracts too. Rather than assisting one person, they are poised to ease transactions between two or more parties, in a decentralised, trustworthy and permissionless way. Also called self-executing contracts or digital contracts, these pieces of code rely on the blockchain that plays the validation role.

For the sake of simplicity, we like to explain blockchain as a decentralised system programmed to verify and record transactions, not only financial, but also contracts or everything of value. Having authorised parties (also called “nodes”) validating any condition eliminates one major but common constraint when it comes to contracts, the “I thought you thought” issue. However, even if smart contracts help exchange money, property and shares in a transparent, friction-free manner, extensive adoption won’t come any time soon. We’ve put together an infographic listing the challenges smart contracts have to deal with before they go mainstream.

“If this, then that” suggests that only if condition or requirement A is fulfilled, can situation B happen. That’s the principle of smart contracts, just imagine a more complex validation chain, where several “If this, then that” transactions need to happen in a chronological order.

People tend to confuse a new technology itself and the possibilities it offers with existing or potential uses of it. A smart contract isn’t a blockchain. It is a piece of code stored on a blockchain. A blockchain transaction triggers the execution of the contract. The blockchain’s database, then, is where the smart contract reads and writes data.

Most of what you read about smart contracts shows how promising they are in terms of speed, cost reduction, remittance, escrow activities, trustworthiness, among others. However, as in the case of every new technology, adoption success has to do with the technology itself but especially with business readiness, people literacy, regulation frameworks and the new experience it brings. Is the new technology fundamentally changing something that needs to be urgently changed?

To some experts in blockchain matters, the development of the Internet of Things (IoT) will help smart contracts’ adoption grow. Indeed, smart contracts can be very useful in a world where things connect together and need, somehow, to talk to each other.

Other experts, though, think that broader adoption will be the result of strong use cases, still inexistent. The key is to understand what a smart contract really is, how it operates on a blockchain and what the limitations of functioning in a decentralised way are. Smart contracts are simply one method for restricting the transactions performed in a database […] and they cannot escape the boundaries of the database in which they reside”.

Others even question the basic concept supporting smart contracts. In principle, they allow entities that don’t trust each other to share information on a data base – the blockchain, and execute transactions without a central administrator. However, smart contracts need a set of rules/computations to validate transactions and, therefore, execute the contract. The entities providing that data, also called “oracles”, must be trustworthy. It still needs to be determined who defines the reputation criteria and qualifies oracles.

Principles such as the “proof of stake” or the “proof of authority”, can also guarantee a blockchain’s operations. In the first case, nodes don’t perform computations, but they have to bid large enough to participate in the mining – the mechanism that allows the blockchain to be a decentralised security – and be paid. In the second case, the ability to validate the transaction is given to certain authoritative nodes. Might the “proof of authority” be legitimate depending on the smart contracts’ use case? Some argue it goes against decentralisation, and therefore, corrupts the smart contract.

Centralised systems perform better and are quicker, argue some experts. People, on the other hand, prefer to execute simple transactions using friendly software, even if it’s controlled by a larger entity. Smart contracts must find a niche and prove they perform better than existing solutions.

10 Challenges to the Adoption of Smart Contracts

Rich discussions happen around cryptocurrencies and smart contracts. It was likely among the “Top 5” most common subjects of last year, and it continues to be mainstream nowadays. We all are tempted to share our opinions based on limited understanding of concepts and their nuances. Below we’ve listed what we consider the top 10 challenges for smart contracts to being more widely adopted. The list can certainly become longer considering the many aspects and concerns around such an innovative technology, but we wanted to give you a digestible overview of the subject. 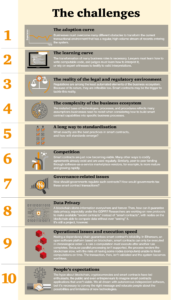 (This infographic is based on the article “How smart contracts automate digital business” written by Alan Morrison, senior research fellow at PwC’s Center for Technology and Innovation)