On 1 January 2018, a further strand of the tax reform will enter into force. It mostly affects married cross-border workers who may work out which option is the most advantageous for them. Find out which tax class to choose.

So far, non-resident married taxpayers could be granted with a tax class 2 if more than 50% of their professional income was collected in Luxembourg. It was the main condition.

As from 1 January 2018, married taxpayers will need to choose between different tax classes, provided that they meet specific requirements. In the future, they will be able to decide whether they would like to file jointly or separately. If they choose the latter option, i.e. standard individualisation, both spouses will be placed in tax class 1. Given that, all things considered, the choice should be done on a case-by-case basis depending on the professional and personal criteria of each couple. Things are a lot more complicated for married cross-border workers. By default, they will now fall under tax class 1. But, a more appropriate tax class can be granted if they meet specific requirements. Case in point: optional regime allowing a non-resident to be regarded as a fictitious resident taxpayer to benefit from the same tax deductions.

The Luxembourg tax authority recently sent out letters asking taxpayers to make a choice. As such, married cross-border workers from France and Germany for instance can ask to benefit from a joint taxation (with application of tax class 2 on household worldwide income). In most cases, it is more advantageous for them. If they do not reply to the letter, they will automatically be placed in tax class 1. In any event, their tax card will not mention tax class 2 but will suggest a tax rate determined on the basis of the information available to the tax authority.

The 90% threshold and its exceptions

There are two exceptions to the 90% threshold:

That being said, those two exceptions still need to be approved by Parliament. Which option is the most advantageous for the individual taxpayer will depend on his/her own circumstances. In this context, the tax authority’s simulator can be helpful to taxpayers. Indeed, they can use it to simulate the various scenarios. Taxpayers can also change tax classes after the fact, if a change turns out to be more advantageous for them.

Those rules do not apply for Belgian resident taxpayers where only the 50% rule condition applies.

Here are some case studies: 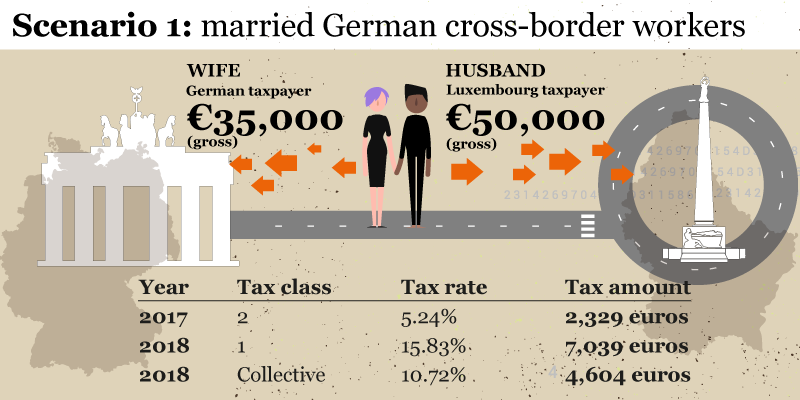 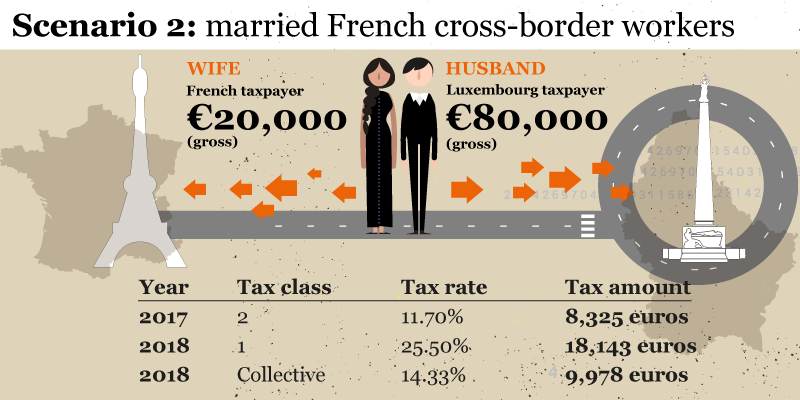 It is worthwhile for all married cross-border workers to work out which option has the most benefits for them. Couples who live in a civil partnership are not considered by these new legislative updates.

The tax reform impacting non-residents as of 1 January 2018 was necessary to restore equal tax treatment between resident and non-resident taxpayers. On top of being complex, the new rules are administratively too burdensome for both taxpayers and the tax administration. A simplification of our tax system imposes itself alongside a need for increased digitisation.

The changes affecting certain non-resident tax payers will come as a surprise to many. Not only the increased tax rates, but also the changing cash flow resulting from the fixed withholding tax rate for all types of salary, i.e. base salary and bonuses, as well as abolishing the lump sum withholdings for second tax cards in the household may have a significant impact on monthly net salary payments.

If you want to know more visit our dedicated webpage here.