The mounting skills gaps within financial services (FS) are spurring a rethink of how we source and select talent. A key element of this shift is aligning recruitment strategies with diversity and inclusion, as FS organisations look to attract more women and people from other underrepresented groups.

The findings of our global inclusive recruitment survey highlight the continuing challenges and need for new approaches. Barely a third of the 55 FS organisations taking part have seen a rise in female applicants as a result of their specific diversity recruitment practices. Less than a quarter report that they’ve received more applications from minority candidates. Without more progress on increasing diversity and inclusion, the skills gaps will persist, which will lead to difficulties in meeting strategic objectives. 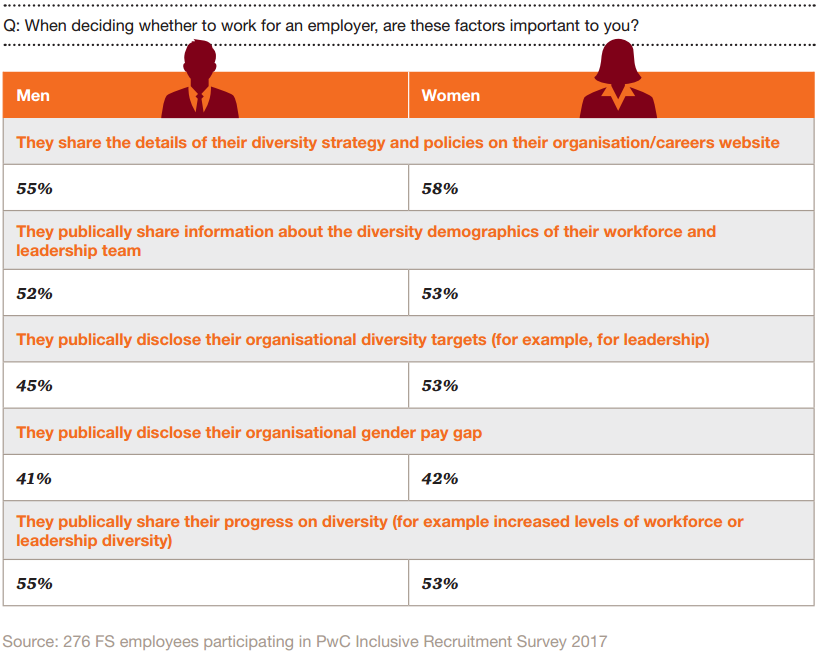 The troubling number of women who still experience cultural barriers underlines the need for a rethink of current recruitment approaches. Nearly 30% of the 232 women working in FS we surveyed believe that recruitment in the industry is biased in favour of men. A similar proportion believes that experienced women are less likely to be hired than male counterparts. As our survey further highlights, candidates want assurance that they’re not going to face this kind of bias. They’re therefore looking very closely at progress on diversity and inclusion within an organisation before applying or accepting an offer.

Clearly, just putting forward high-level commitments is no longer enough. How can your organisation make real progress in broadening recruitment?

The FS organisations that are most successful in attracting women and minority groups have adopted a more systematic approach to identifying and tackling the biases that impede inclusive recruitment. With women in FS seeing gender stereotypes as the biggest barrier they face, key steps include finding ways to make interviewers more aware of unconscious bias and its impact.

Within the industry, some companies have begun to use electronic screening tools and carry out initial interviews on a pre-recorded video platform to further eliminate human biases. While follow-up interviews are face-to-face, recruiters structure questions to help increase consistency and objectivity.

2. What gets measured gets done

Participants that are having the most success in broadening recruitment recognise the tangible impact that targets can make. This includes targets for gender and others forms of inclusion within recruitment and subsequent career progression, supported by active steps to promote their achievement. Monitoring data on the proportion of women and minority groups at each stage of the talent pipeline helps identify the issues most in need of tackling (e.g. image, recruitment and promotion or attrition issues).

Regular tracking of progress against targets would also enable you to monitor whether policies to increase diversity are having an impact and to take corrective action if not. Experience indicates that there are two key components to making the most effective use of targets. The first is being able to monitor and analyse workforce data (such as employee demographics and discrepancies in promotion) to identify areas requiring additional attention and to effectively set and measure progress against targets.

Second, targets tend to have greater urgency and impact when management is individually accountable and performance objectives and rewards take into account progress against diversity goals. Yet, our research shows that FS organisations are falling behind in both of these areas. Less than a third of them hold leaders accountable for diversity and inclusion results, and less than half regularly gather and analyse employee demographic data. The starting point would be investing in appropriate data systems and implementing a governance structure around them.

3. Manage diversity and inclusion as a reputational risk

Transparency over diversity and inclusion is important for both men and women in deciding what employer to work for. And as diversity and inclusion become increasingly crucial in determining how FS organisations are perceived by customers, investors and regulators, as well as talent, it’s important to recognise this as a reputational risk, rather than just an HR issue. Priorities for managing the risk include gauging how your organisation is perceived on diversity and inclusion and what risks and opportunities these perceptions open up. No matter what stage you’re at, you can get on the front foot by acknowledging that there are issues you need to address and set out your plans for accelerating progress. Such openness and resolve can make a favourable public impression.

Employers point to an insufficient candidate pool as the biggest barrier to hiring more women. But a significant part of the pool remains untapped and underutilised. Professional women returning from career breaks are a key example, yet nearly half of the FS employers in our survey (49%) have no returnship programme.

5. Use technology to broaden talent pool and strip out bias in selection

The latest artificial intelligence (AI) systems can help you cast your talent net further and target individual candidates. Using AI to screen them and carry out initial interviews can also offer a more accurate match between position and candidate, as well as cut out a lot of the unconscious biases. The potential for further deployment of these technologies within FS is significant, with less than 30% making using of them currently.

You can’t be one of the front-runners straight away. But you can accelerate progress by adopting a more informed and active approach to diversity and inclusion. The starting point is changing the way your organisation and people perceive and manage diversity and inclusion. Make sure the reality in your organisation matches your claims. Get your business moving in the right direction, structure your actions around few, but measurable indicators, and you’ll gain an important edge in attracting key talent and delivering your business objectives as a result.