Imagine a world where workers and companies seek out greater meaning and relevance in what they do. In essence, fairness and social good are dominant. Businesses with a heart and artisans thrive in a bustling and creative market with a strong emphasis on ethics. In the fourth article of our 2030 series, we’re exploring a world where humans come first.

Social-first and community businesses find the greatest success and prosper. Also, crowdfunded capital flows towards ethical and blameless brands. Basically, it’s a world where workers and consumers search for meaning and relevance from organisations, ones with a social heart. Naturally, artisans, makers and ‘new Worker Guilds’ thrive. It’s a world where humanness is highly valued.

Here are the main features of this world:

Fairness in the distribution of wealth

In the Yellow World, workers and companies seek out greater meaning and relevance in what they do.

A strong desire for ‘fairness’ in the distribution of wealth, resources and privilege drives public policy, leading to increased government intervention and consumers and workers voting with their feet.

Workers find flexibility, autonomy and fulfilment, working for organisations with a strong social and ethical record. This is the collective response to business fragmentation; the desire to do good, for the common good. A wider range of work is regulated by a concept of ‘good jobs’ and decent work; moving away from traditional employer/ employee relationships.

The two sides of technology

Technology has helped to create the vibrant Yellow World by lowering barriers to entry by providing easy access to crowdfunded capital and a worldwide market. It has enabled entrepreneurial companies to compete in areas previously dominated by large organisations.

But it’s a world where conflicts remain around the use of technology, as people are less likely to take the downsides of automation without a fight. As more people are impacted by technical advances and see their skills become obsolete, disaffection and the push-back against policies that favour the elite grow.

However, ‘invisible technology’ such as Artificial-Intelligence driven ‘back office’ functional support and the automation of tasks that are damaging or impossible for humans, still pervades.

What it means for workers

Like-minded workers gravitate towards each other, aided by technology platforms. Collaboration is key, with individuals coming together to work on projects or to deliver on an idea – for as long as it takes.

Guilds help workers create scale when needed, remain current and build trust in their services. They provide members with a strong sense of identity, with individuals seeing themselves as members of their profession. Workers identify with each other because of their particular skills set, interests and goals.

It’s a world where non-financial rewards are assessed fairly in a trade-off for less pay. Work is often a fluid concept and a regimented 9 to 5, Monday to Friday working week is rare, where borders between home and work are blurred.

The Yellow World at a glance 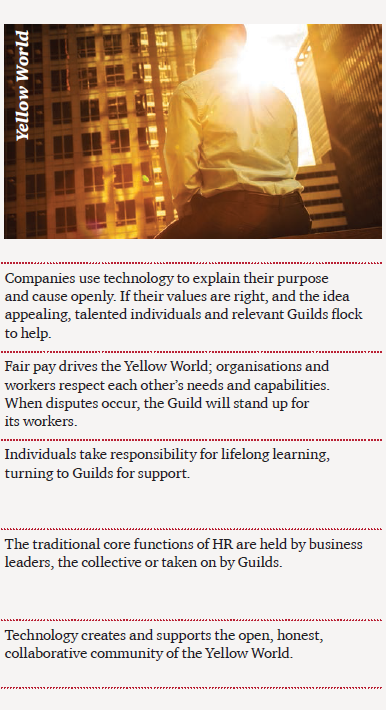 How would you fit in the Yellow World? Please, share with us your feelings and stay tuned for the other worlds.